Home
|
Survival News
|
When Food Is Worth More Than Gold 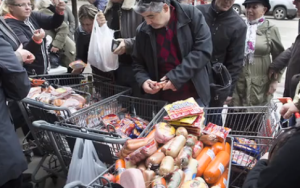 Food prices continue to rise, and many try to blame increased fuel costs as the culprit. However, the reality is that natural disasters, commodities speculation and corporate greed are jacking up the price we are paying for everything, from tomatoes to cereal. Our food supply is tied in to an intricate global network that is pretty much controlled by a few major corporations and supported by many smaller businesses. While we still have an abundance of farmland and natural resources, much of our crops or exported and traded for things that we consume, yet do not grow here. Our focus is on growing staples such as corn, wheat, soybeans and some green veggies, but much of what we eat comes from abroad.

As global warming, climate change, economic uncertainty and political instability from across the globe continue to all happen at once, food prices around the world are climbing higher and higher. Rice in Asia is nearly double the price it was just a couple of years ago because massive flooding decimated crops and reduced supply. Drought in the heartland in America reduced supply of wheat, and drought in the Midwest zapped our corn crop last year. Speculators and investors who set the price for food have been raising costs because demand is so high, and this is forcing people to pay more for what they get at the store.

Fuel, labor and ancillary factors also play in to what we pay at the store, and there are no signs of this slowing down. In fact, as our economy continues to tank, and instability grips the world, the value of the dollar is in sharp decline, making everything more expensive. Food will one day be prohibitively expensive, and more and more people will be unable to afford basic staples that are required to simply stay alive. This is already starting to happen, and as things worsen prices will go up, and government intervention and aid will go down.

Aside from civil unrest during an economic meltdown, food and fuel prices are the second most important concerns that will impact the vast majority of Americans. Couple that with drought in some parts of the country and floods in others, the lack of a reliable supply will make food a valued commodity that people can conceivably kill for in the not too distant future. If our country continues to head down this path of insecurity and global instability, one of the most important things that you must in order to survive is to secure a stable and affordable food supply.

The best thing to do is grow your own as much as possible, but this is not always easy or practical. The next best thing is to make sure that you have ample supplies of dry goods and other non-perishable items on hand so that you will not go hungry when supply chains are disrupted. Stores will go bankrupt, food distribution centers will cease to operate and harvests will spoil during an economic collapse, and you need to be ready to weather this storm. Imagine the government rationing food in aid stations, or companies and grocers jerking up prices because consumers have no choice.

Imagine people killing for a good meal or a supply of canned goods. This nightmare scenario is not far from the realm of possibility, and there will come a time when we will be forced to beg, wait and accept whatever rations are given to us on any particular day. Focus on securing your own resources and taking steps to hide and protect them. When things really hit the fan, your food stores will help you to endure the dark days that are surely on the horizon, but many people will be very happy to try and take these resources from you.

If you have land and you are able to have a garden or grow crops, start thinking about how you can become more self-sufficient. You may be able to trade, barter or sell your goods in the future, and your resources may turn out to be a stable income source for your family as well. Preparing for a food crisis is one of the most important things that anyone can do in order to sustain themselves during an economic collapse. As our government continues to spin out of control, global weather phenomenon decimate crops and economic woes plague most of the developed and developing world, now is the time to plan and prepare for the looming darkness that is on the horizon. Food security is of paramount importance, and you will not be able to count on going to the store when you run out of something like you can now. Be ready and make sure that you have enough food on hand to survive the early days of the coming collapse.