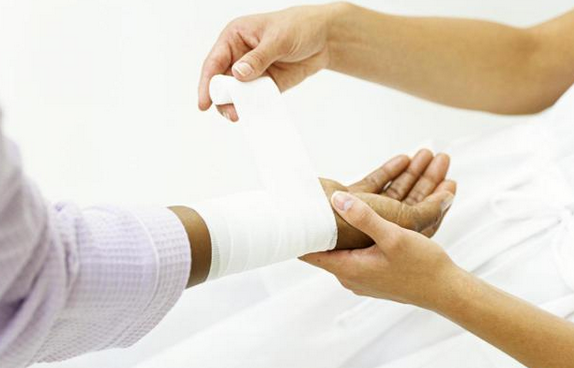 The main goal of bandaging is to secure a dressing and protect the wound or injury.  This is true whether immobilizing a limb or covering a gun shot wound.  Therefore, the first rule of thumb is never to put a bandage directly on top of the affected area until a proper dressing has been applied.  Doing so can aggravate the injury and make matters worse. 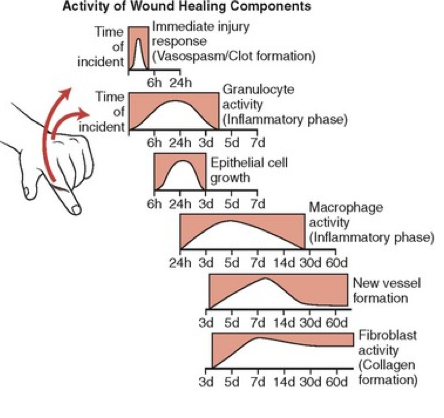 Different bandages work for different situations, but gauze and Ace bandages are the most common.  However, you can use almost any type of fabric to create a makeshift bandage in the field as well.  The key thing to remember is that you want to make the bandage secure enough to cover the dressing and protect the wound or site of the injury.  However, you don’t want to make it too tight that it will impede circulation or aggravate the wound as well.  A little bit of common sense will go a long way as you are dealing with a specific situation, but make sure that the bandage is not doing more harm than good. 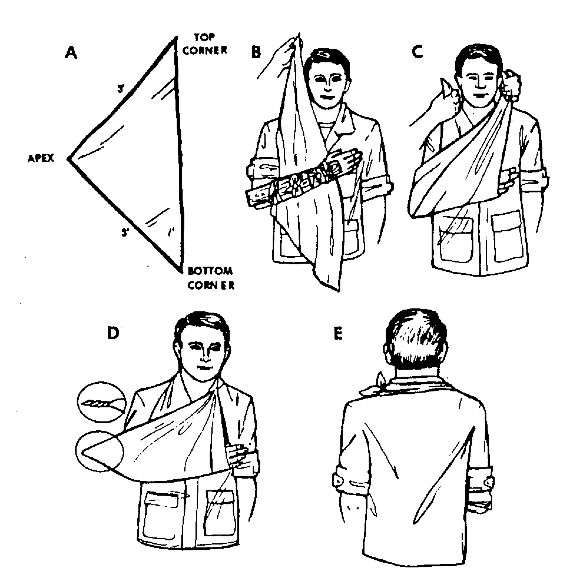 Triangular Bandages
Triangular bandaging involves taking a large piece of fabric and folding it once to form a triangle.  You can then keep repeating the process until the right size is obtained.  It can be used for slings or injuries near joints.  It is also an excellent way to bandage a head wound.  Make a fold from the base upwards so that there is a thicker pad along the bottom of the triangle.  Place this portion of the bandage from front to back just above the eyebrows.  Pull the rest of the fabric over the head and bring all three ends together in the back.  Cross over once, bring the folded portion back to the front and tie off just above the eyebrows.

To make a sling, place one end of the triangle on the shoulder of the affected limb, and let the bandage fall freely next to the hand.  Make sure that the base of the bandage is facing the limb.  Fold the loose end around the injured limb, bring it to the shoulder of the uninjured side and tie both ends together so one is behind and the other in front of the neck.  Make the tie in the back somewhere below the shoulder.  Make sure to adjust for size so that the limb is properly supported.

To make a triangle bandage for the foot, fold the bandage over once to create the triangle.  Then place the foot directly on top of the bandage so that it rests along the center from the base to the apex.  Leave a few inches of space between the toes and the top of the triangle.  Fold this piece over the top of the foot.  Criss-cross each end of the bandage over to the opposite side of the foot as many times as necessary and then the them off behind the ankle.   You can also repeat this process for injuries to the hand. 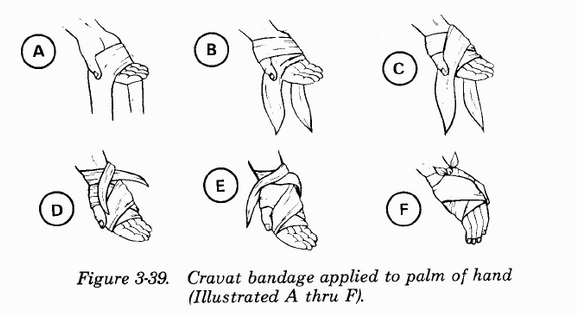 Cravat
Cravat bandages are simply a triangular bandage that has been folded from the bottom up until the top edge is tucked behind the newly-formed straight bandage.  This method is preferable to folding a bandage in the form of a square or rectangle because it increases stability and strength.  It is an excellent way to bandage injuries to the knee or elbow.  Simply place the center of the bandage over the outside of the joint, pull back and keep wrapping as necessary.  Tie it off behind the joint. 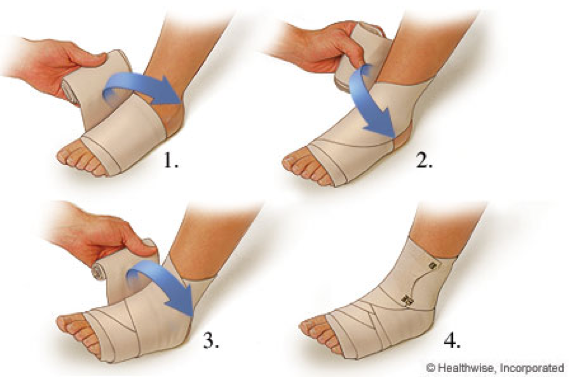 Roller Bandages
Rolled bandages are useful when protecting swollen joints, injuries to the ankle or along sections of the arm or leg. Simply roll over the dressing and make sure to extend the bandage a few inches above and below the injury.  Roller bandages are also great for injuries to the torso or lower portion of the skull and forehead.  Secure the bandage by tying both ends together or using fasteners.

These are just a few of dozens of techniques out there that are used by medical professionals in the field every day.  However, these examples can be particularly useful for protecting most common injuries that you can expect to encounter.  Practice and explore other options in order to enhance your skills and improve your ability to render appropriate aid if and when the situation arises.