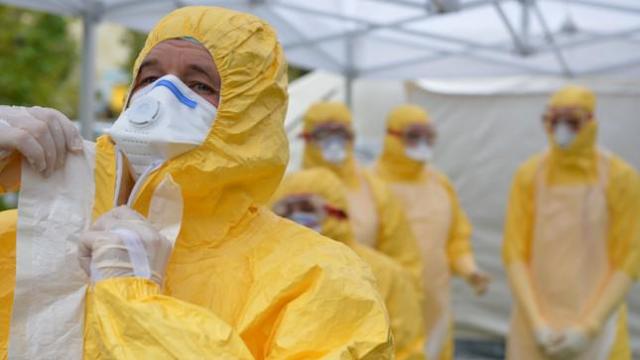 The Department of Defense recently released their annual threat assessment, and the report specifically names biological weapons as one of the biggest threats that we will face in the not-too-distant future.  In fact, it’s being referred to as one that is existential, massive, unprecedented and potentially-catastrophic.  Yet, at the same time, officials are proposing budget cuts that would virtually-eliminate spending on programs that track, study and try to protect the public against these threats.  Consequently, the public is not only being given mixed-messages regarding the threat itself, but the government will be ill-equipped to deal with the aftermath if an attack were to occur.

The field of biology and chemistry has exploded in the past decade, and a good percentage of graduates end up working for labs run and financed by the government or large chemical companies.  That’s where the money is, and that’s also where the best career prospects are at the present time.  Unfortunately, many of these programs center on research and development, and a lot of this is aimed at engineering pathogens that can be used in biological attacks.

There is also a concerted effort by foreign governments to train people in the United States only to have them return home and contribute to working on their own country’s biological weapons programs as well.  Consequently, hundreds of billions of dollars are being spent on hundreds of programs that are producing thousands of variations of pathogens that are extremely-harmful to humans.

This is nothing short of a recipe for disaster.  Not only does this exponentially-increase the chances of experiencing an attack, but attacks may ultimately be carried out by a number of non-traditional actors.  This makes prevention all the more difficult as well as trying to plan for an appropriate response.  Additionally, harmful pathogens that are being grown in labs across the country and around the world also increases the chances for accidents to occur.  If and when that genie does get out of the bottle, there’s no telling what kind of devastation we can expect.

So, if we’re facing an unprecedented threat level, we’re more-vulnerable to being exposed as the result of an accident, and our capability to protect ourselves is limited to begin with, why is the government cutting back on programs?  There’s no clear answer, and this lack of clarity has fueled a wide-range of explanations, including some pretty far-fetched conspiracy theories.

However, there are a few plausible explanations that carry more weight than others.  First, maybe the government drummed up the threat in order to score political points for one reason or another.  Second, maybe budget cuts were intended to move research into secret, black-budget programs to calm a jittery public once they realized that this threat exists.  Finally, this whole thing could be a false-flag attempt by the government in order to test biological agents in the real world, on ordinary people.

No matter the reason, it’s important to always remember that we are just as vulnerable to the effects of a SHTF biological attack as we are to any other type of crisis.  Consequently, we need to do our best to stay abreast of the latest threats and come up with ways to protect ourselves if an attack or accident ever occurs.  It’s also important to avoid the inclination to trust what the government is doing or what they are saying, because doing so is exactly what they want.

Remember that post-SHTF, if the government remains in power, they are going to go to great lengths to control the population.  It’s also quite possible that the government will engineer a crisis of their own making at some point in the future in order to accomplish that goal as well.  A biological attack has the potential to alter the course of society, and going through the aftermath could literally resemble some post-apocalyptic scenarios we see in SHTF movies.  Consequently, we need to prepare for this possibility in order to have options that give us some degree of freedom or self-determination.

All of the ingredients are currently in place for such a contingency to occur.  Are you ready if that day were to come tomorrow?