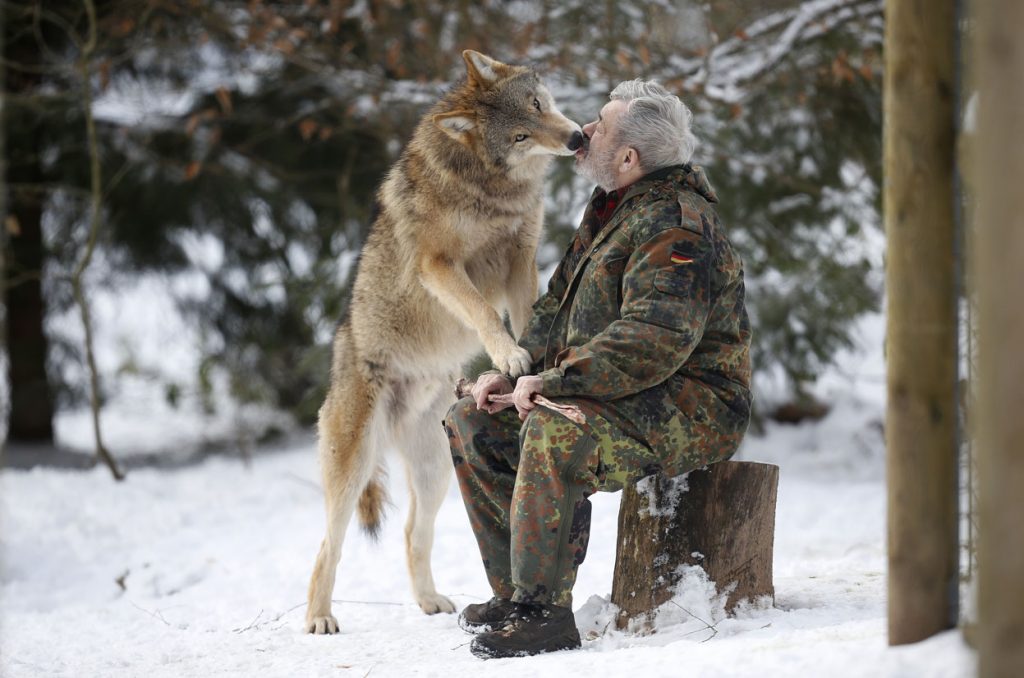 Wolves are indeed powerful, skillful and intelligent hunters that are worthy of our respect.  However, wolves rarely pose a threat to humans, and most attacks are caused by rabid or unusually-aggressive animals.   Consequently, their howl is definitely worse than their bite most of the time unless we pose a threat to their young, territory or next meal.  Here are some facts about wolves that can helpfully dispel some of the misdirected myths that cause undue concern.

While wolves and dogs belong to the same family, wolves are by-far larger and more powerful.  The average, full-grown adult female weighs more than 80 pounds whereas males can be 110 pounds or more.  Wolves are also much bigger than most dog breeds, coming in at around six feet long and two to three feet tall.  Their paws can grow to be almost as big as human hands, and some can be more than five inches long and four inches wide.  They also have more than 40 teeth.

Wolves normally breed in the late winter, and the gestation period is only a little over two months.  The average litter size is about six pups, and they weigh in at about a pound each.  Mothers are fiercely-protective of pups, and a number of unwanted wolf encounters occur when people unwittingly get too-close for comfort.

Wolves are very social animals that tend to travel in packs where individual rankings and roles are firmly-established.  The average pack size is about six-eight, but some can include more than 20 members.  Pack size is often determined by the amount of resources that are available in the area, and areas that have an abundance of food and water will usually attract larger groups.

Wolves often work together on hunts, and they also share in the spoils unless there’s not enough to go around.  When this happens, fights can break out, and humans can get caught in the middle if they find themselves vying for the same meal.  The territory that wolf packs mark for themselves also varies depending on the abundance of food in the area as well.  Smaller territories can range from 25-150 square miles in resource-rich areas whereas ranges can increase to nearly 1000 square miles when resources are scarce.

Wolves are also fast.  They normally walk a little more faster than humans, but when they sprint or run, they can approach 40 miles per hour.  There’s no way that we, as well as many of their prey, can outrun them.  In fact, running from a wolf will usually trigger a primal attack response.

Wolves prefer to eat large, slower-moving hooved animals such as deer, elk, caribou, moose, bison and oxen.  However, they will eat smaller animals such as rabbit, fox and even squirrel if those are the only food choices around.  Wolves do not eat humans.  However, they can attack, and brutally-so if they feel threatened.  However, these attacks are rare, and the likelihood of encountering a wolf in the field is equally-unlikely because they are pretty skittish animals despite their terrifying reputation.

If you’re ever in a situation where you’re in the field in wolf-country, chances are that you won’t experience any problems as long as you take some basic precautions.  Survey the area to avoid getting too-close to dens.  Avoid leaving food out that could attract them.  If you get too-close-for comfort, leave the area to avoid provoking them to defend their interests.  Finally, don’t ever get in a competition with wolves for food.  If they come upon your hunt and claim it for themselves, let them have it.  It’s better to find another meal than fight a pack of wolves who are probably hungrier than you.

Take some time to learn more about wolves and how to coexist with these beautiful creatures.  We actually pose a greater threat to wolves than the other way around, and most of people’s fears are completely-unfounded.  Knowing a little bit about wolf behavior can alleviate many of these concerns, and this can help to make our time in the field a lot easier to contend with.