Home
|
Survival News
|
The 20 Best Knives Ever Made

Roughly 2 million years ago, a particularly bright specimen of Homo habilis needed to cut something and decided to invent the knife. We’ve come a long way since then. And for the last 40 years we’ve been experiencing something of a boom in the development of ever better knives. Here are 20 knives that I consider great – head and shoulders above the competition.

→  Click on the image of  any knife for more information

In 1943, the U.S. Marine Corps issued a knife to its fun-loving members. It was made by Camillus Cutlery Co. and stamped with their Ka-Bar trademark. Its equipment number was 1219C2. The knife had a 7-inch Bowie-type blade, a leather-washer handle, and a steel butt cap. It was one of the most successful pieces of military equipment ever. The Navy had its own variant called the MK-2, and envious soldiers tried to steal both.   »More info

A knife that embodies the spirit of the wolverine, well respected for its cunning and ferocious hunting abilities. Field and Stream calls it “The sharpest factory edge you’ll find unless you work for Schick or Gillette.”  »More info The idea of the multitool is an old one, but it always involved attaching gimmicks to a knife, which resulted in a poor blade and a mediocre collection of tools. Tim Leatherman reversed this 25 years ago, using folding pliers as his platform and installing tools in the handle, creating something new and terrific.There are all kinds of Leathermans, but my favorite is the Wave. I keep one in my range bag and wear another on my belt. It’s hard to list the jobs it can’t do, and the knife does a dandy job of gutting a deer.  »More info

Bob Dozier is synonymous with the classic American design pros. Boker is fortunate to team up with Bob to produce this impressive fixed blade that features a 3-5/8″ blade of D2 steel. Handle material is handsome brown Micarta. Includes a high grade leather sheath.  »More info

Randall knives have been the best known handmade knives in the world. No two Randall Made™ knives are exactly alike, for no jigs or patterns are used in their final construction. Large scale commercial production with this kind of attention to detail is not feasible and that’s why knives of this unique quality are not widely available.    »More info Compared to making a folder, building a fixed-blade knife is a walk in the park. Folders are the true test of a smith’s skill as a machinist and designer. For over 30 years, Ron Lake has been one of the premier makers of folders. He developed the Inter-Frame concept: A steel frame surrounds the handle scales, enabling him to use relatively fragile materials like sheep horn without any fear of chipping. Lake knives also employ a Tail-Lock, a protruding lever at the rear end of the handle that locks the blade in place and then releases it. A great many Lake folders are fancy; all are tremendously strong, and the workmanship of them is unsurpassed.  »More info The ulu is a distinctive knife of the northmost-dwelling Native Americans. It’s a terrific chopper, scraper, and skinner. The crescent-shaped blade is 3 to 4 inches, and the handle rides directly above the cutting edge. Once you get used to it, you wouldn’t trade it for all the blubber in Alakanuk. A lot of the commercially made ulus are souvenirs and aren’t really working knives. If you want a genuine working ulu, get it from Knives of Alaska.  »More info The Uncle Henry line – named for Henry Baer, Schrade’s president – appeared in the 1960s. There were all sorts of Uncle Henry knives, but the one that won my heart was a three-blade folder of the type known as a premium stock knife. It had a saber, a sheepsfoot, and a spey blade made of stainless steel. It’s one of those wonderful tools that works all out of proportion to its price and size. Until they closed their doors in 2004, Schrade backed its Uncle Henrys to the hilt. If you broke one or lost it, they would replace it. I lost about three a year but never had the heart to take Schrade up on its offer. I would just buy another.  »More info With 30 tools in its handle, the Swiss Champ is the ultimate evolution of the Swiss Army knife (the original had four blades). I’ve carried one for years, and I have used just about all its tools. People make fun of it until the day when they sheepishly ask to use it. Years ago, my car was broken into and the thief left a negotiable check untouched – but he took my Swiss Champ.  »More info

The origin of the Nessmuk knife is unknown. The single illustration in “Woodcraft” is the only rendering or specific mention of the knife by Sears. It may not have even existed since as far as I know no original knife has ever been seen or photographed. Sears was known to have knives made to his specifications as was the case with his double bit axe. He had the axe made by a surgical instrument maker named Bushnell in Rochester, NY so there is the possibility he had the knife made there too. This odd-looking tool goes back to 1941, when Fredrick Ersham put it on the market after 10 years of development. The original had a leather-washer handle and a D-ring guard like a cutlass. The modern version utilizes a hardwood handle and no guard; otherwise it is unchanged. You can use the Pal as a brush hook, machete, knife, shovel, and axe. There’s little you can’t do with it. It’s affordable, light for its abilities, and indestructible. It and I are about the same age. I think it will outlast me by quite a margin. »More info Technically, the Brown Bear is a cleaver, not a knife. Whatever. You can use it as a knife, or a cleaver, or an axe. Its 61/2-inch blade has a couple of ingenious touches: The front is rounded and sharp, and ahead of the grip is a hole for your index finger that lets you choke up on the blade. Stick your finger through the hole, and the front edge becomes an ideal skinning knife.    »More info

Knife expert Bernard Levine put it perfectly: “The Model 110 was the design that would make [Al Buck’s] knife company world famous and the trade name Buck Knife just as familiar (and as often misused) as Kleenex or Xerox.” The 110 appeared in 1963 and was an instant sensation – a brass-framed, Macassar ebony-handled lockback folder that was strong enough to do the work of a fixed blade. Buck sold it with a black leather belt sheath because it was too heavy to carry in a pocket. Since its debut, there have been four major revisions to the Model 110, mostly to make it stronger, slimmer, and sleeker. In the past 45 years, Buck has sold 14 million.  »More info 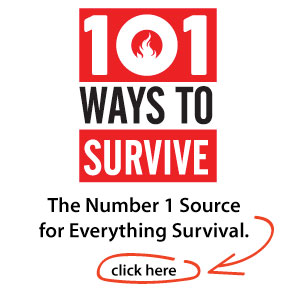 Field and Stream
Edited by Survivalkit.com