Home
|
Survival News
|
Working Outdoors This Summer? Watch Out for This Dangerous Weed 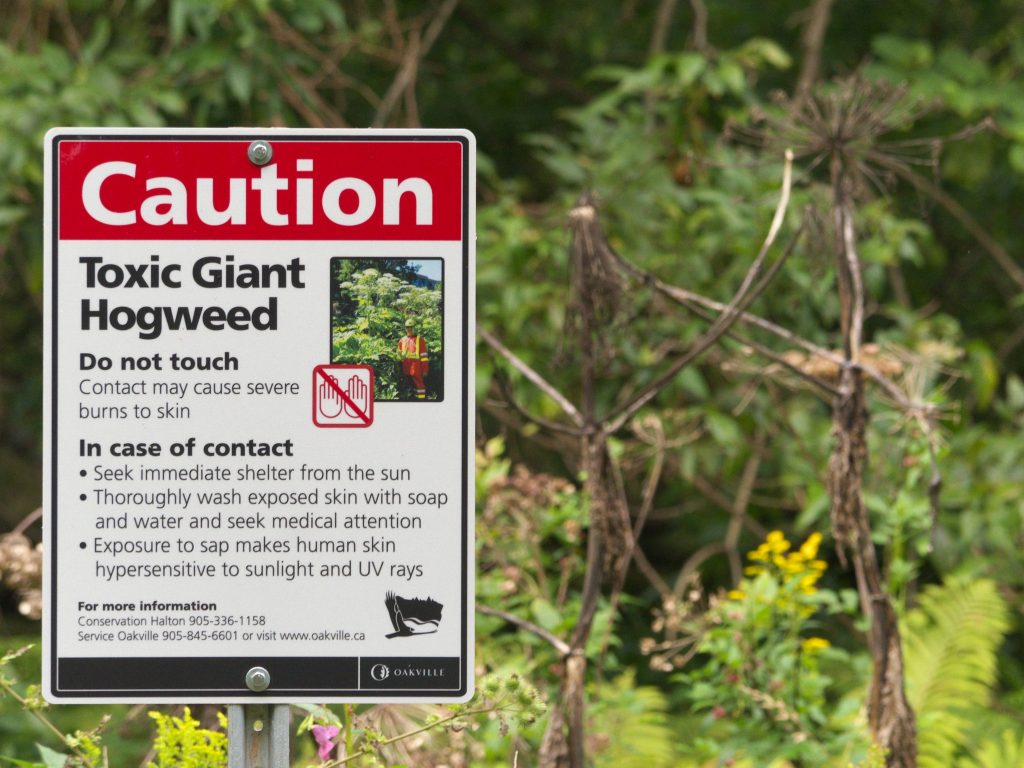 A highly-toxic, sturdy weed that is thought to have been introduced into the United States a few decades ago is flourishing in many parts of the northeast.  Originally found in parts of Europe, the hogweed contains oil that is highly-toxic to humans, and even a small amount on the skin can cause severe, irreversible damage.  In some cases, victims have been blinded as oils find their way into the eyes as well.

As more and more people are encountering this benign-looking, weedy shrub, more are ending up in emergency rooms and doctor offices after symptoms develop.  Consequently, officials are now cautioning people who plan on spending time in the outdoors or removing large weeds and shrubs to be  mindful of this potential threat.  Unfortunately, word is slow to spread, and people are unwittingly putting themselves at risk as a result.

The hogweed is a large, pretty plant that can grow to be more than 10 feet tall.  It also contains sap, and the sap includes a compound called photosensitizing furanoccumarins.  This is a skin irritant that is highly-sensitive to sunlight.  Once the oil gets on the skin, it produces a nasty reaction that includes discoloration, blistering and persistent and severe irritation.  Many people confuse it with poison ivy, oak or sumac, and seek remedies accordingly, only to find that they don’t work.

These blisters will usually start to develop within hours of exposure and get progressively worse over the following days and weeks.  They can remain on the skin for more than six months.  If the oil gets into the eyes, the reaction can cause permanent damage, including blindness, and oils on mucous membranes in the nose and mouth can also cause long-lasting problems as well.  Consequently, avoiding coming into contact with the oil of the hogweed is the single, most important thing that we can all do to prevent exposure.

Fortunately, if you’re able to rinse away the oil within about 15 minutes of exposure, you can dramatically-reduce the chances of developing a reaction.  Officials suggest that exposed skin should be washed with cold water for at least 10 minutes, and that clothing be washed immediately as well.  Apply high-quality sunscreen and cover exposed skin if out in sunlight, and immediately get indoors.  Try to avoid being outside in the sun for at least 48 hours.  It’s also recommended that a topical cream containing aluminum acetate be applied to the skin in order to reduce irritation until symptoms subside.

If symptoms develop, or start to get worse, see a doctor as quickly as possible.  There are a number of more-intensive treatment options available, and early intervention is key.

While most encounters with hogweed have been occurring in the northeast, the range of this plant will spread over the course of time.  Take time to familiarize yourself with this plant, be mindful of whether or not it’s in your area, and approach them with caution.  This is one plant that you want to avoid touching at all costs, and it is a threat that we should all be taking seriously because it only takes one encounter to produce potentially life-altering consequences.