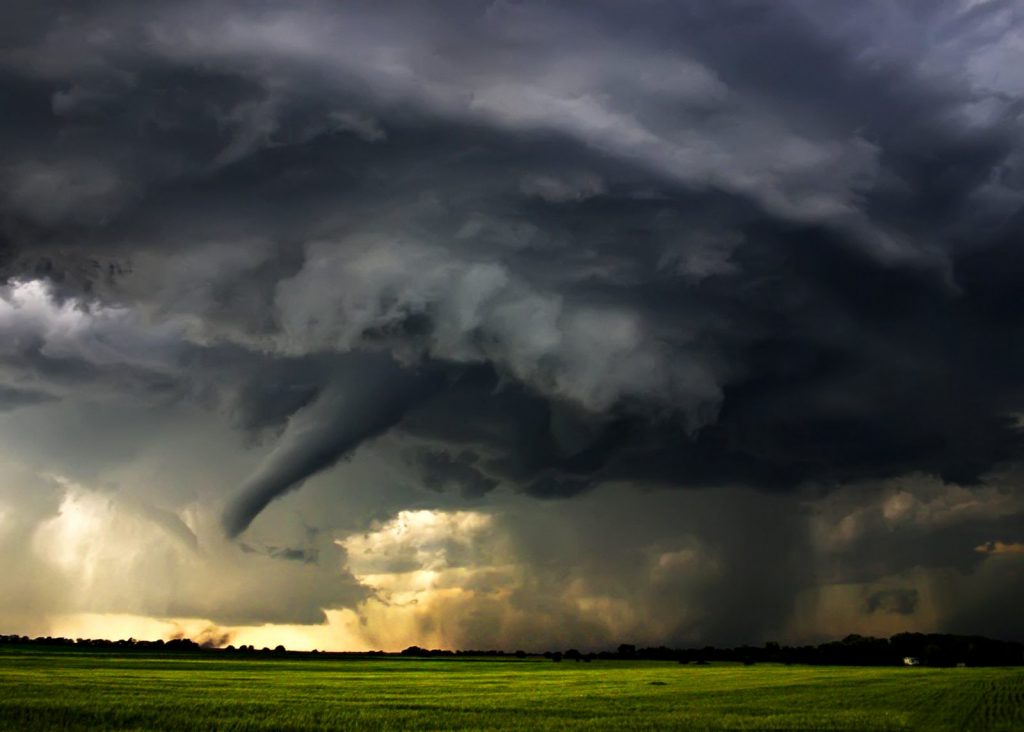 Tornadoes are inextricably linked with thunderstorms, but not every thunderstorm has the capacity to produce twisters.  In fact, the majority of thunderstorms that form around the world, even severe ones, do not.  Only a special few, that most-often form in the central and eastern United States, produce thousands of twisters every year.  Let’s take a look at some of the conditions that need to be present in order for a thunderstorm to become tornadic.

The fist ingredient that contributes to the formation of twisters is atmospheric instability.  Usually this involves rising, spiraling columns of warm, moist air that collide with cold, dense air.  As the day progresses, energy from the sun heats the air which sets this process in motion until storm clouds develop and start releasing their energy.  While all thunderstorms are formed by warm, unstable air meeting cooler air above, large temperature differences between the two, along with strong updrafts associated when two air masses converge contribute to the majority of tornadic cells.

Another key ingredient is wind shear, or when winds sharply change direction at different levels.  For example, surface winds may be blowing from the west but quickly change direction to the east a few thousand feet above the ground.  When these wind masses meet the unstable air that creates thunderstorm cells, the collision causes air to rotate in columns, and some of these columns form on the trailing edge of storms, producing tornadoes.

The majority of storms that produce tornadoes occur along outer bands of low pressure systems or along cold fronts.  Cold fronts are simply a wall of cold, dense and heavy air that plows through warm, humid air masses.  It causes the warm air to rise, in an unstable manner, and this creates the right conditions for powerful storms.  The most powerful tend to be in the spring and fall when temperature differences and wind speeds are at their greatest.  This is why we tend to see more tornadoes during this time of the year.  The most violent tornadoes also tend to form along converging air masses as they move from west to east.

However, weaker tornadoes can form when rising, spiraling columns of warm air rise or cold air sinks within storms in places where the air is more stable than with cold fronts.  In fact, Florida, which leads the country in the number of tornadoes that form every year, also has the fewest cold fronts.  Low pressure systems, whether hurricanes, or those that are less-intense, are what create the right conditions for twisters to occur.  Wind shear still occurs in these storms, but the effects are usually not as dramatic or intense.

So, the next time you see a weather forecast that depicts a cold front or low pressure system, take a closer look at what it may portend.  If the cold front is colliding with a hot, humid air mass, there’s a good chance that severe weather, along with supercells and tornadoes, will form at various places along that line.  If you see a low pressure system that produces a lot of pop-up thunderstorms in hot and humid areas, such as along the Gulf coast and mid-Atlantic, you may encounter some tornadic activity as well.

While this general overview can help you to hone in on areas where storms may occur, it’s also important to be mindful of forecasts, watches and warnings when possible.  However, learning more about the characteristics of cold fronts and low pressure systems can help you to identify potential threats.  This will help you to make sure that you’re taking appropriate steps to prepare if you aren’t able to get an up-to-date forecast, and this can be particularly useful if you find yourself in a survival situation in tornado-prone areas.