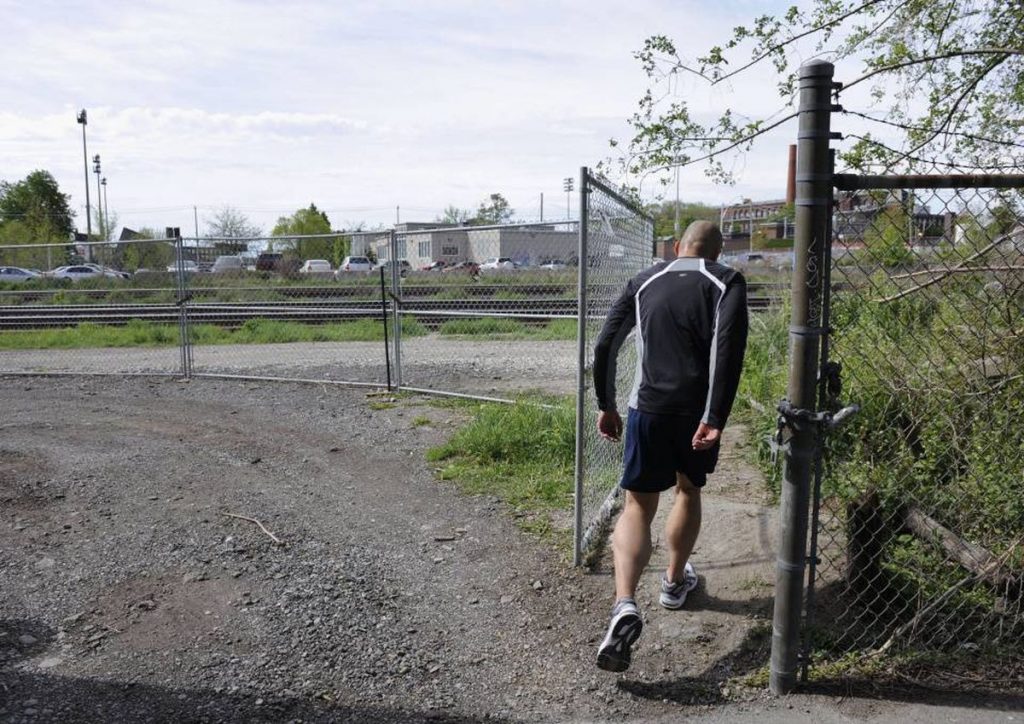 I recently had a series of odd mishaps while taking a hike around the edge of my neighborhood.  Some unexpected railroad construction closed down a crossing that I usually walk over on the way back, and I had to improvise a detour.  Otherwise, I would have been forced to double back and retrace my steps, and I was too achy and lazy to choose that option.  So, I decided to walk along the tracks until I came across a suitable shortcut, but I also encountered some surprising setbacks along the way.

As I was hobbling across the stones that line the railroad tracks, I started to notice paths that cut through the vegetation and seemingly-led to the neighborhood on the other side.  I climbed down the rocky embankment and then pushed my way through the narrow break between trees, shrubs and tall weeds.  However, the path only led to a tall fence bordering someone’s backyard that also contained a large dog.  So, I backed out, climbed back up the embankment and walked a little bit further before coming across another path.

I took that one, but it was also blocked by a fence that the village put up, and I couldn’t climb it to get to the street on the other side.  Keep in mind that I couldn’t see these fences until I was nearly on top of them.  I once again backed out, climbed up the embankment, and decided to keep moving forward.  I came across a couple more trails, experienced similar problems, and I finally gave up and retreated.

However, by the time I decided to turn around and take the long way home, my ankles hurt, and the pads of my feet were sore from hobbling over all of those jagged railroad rocks.  I lost my balance twice, fell once, and I ended up scraping my palms and one knee as I tried to protect myself on the way down.  Of course, I didn’t have any first aid items with me, since I was going on a walk a stone’s throw from home, so I had to rub some leaves on the scrapes to wipe away the blood.

As I continued down the tracks until the next crossing, the sole of my left shoe split right down the middle after being punctured and stressed my multiple rocks.  I ended up with a couple of blisters and a bruise as a result.  I also stepped into a piece of glass from a broken beer bottle as I was climbing down the embankment to join the sidewalk and got a nice cut from that as well.

By the time I reached civilization, I looked like I was attacked by a mountain lion.  My shoes were destroyed, I was bloody and dirty, and I was dripping with sweat.  All of this because I decided to take a shortcut instead of the more-sensible option.

All of this sounds a lot worse than it really was, but it was a good, teachable moment nonetheless.  I started to think of how that mess could have been avoided simply by not being lazy and taking the proper route.  I should have also re-thought my choice to walk down railroad tracks in inappropriate shoes.  I should have re-considered the sense of following paths after the first two didn’t lead anywhere.  However, I got fixated on the challenge and goal of finding a shortcut, and this clouded my judgment.

Fortunately, this walk was inconsequential, and the only harm caused was a few cuts and scrapes along with a destroyed pair of cheap shoes.  However, if I made the same kinds of impulsive decisions in the field during a crisis, who knows how life-threatening those decisions could become.

Let this serve as a reminder of the importance of assessing risk and being properly-equipped before making any unexpected, random changes to whatever plans we have at the time.  A few wrong choices can lead to serious problems, and it’s always best to err-on-the-side of caution, even if it involves doing something we may not want to do.