Fire hardening is a frequently misunderstood concept. Many people think that fire will harden wood by effecting some kind of structural change in the material. But in truth, fire hardening is simply the act of “super drying” the wood. Wood is at its softest when it is moist. When wood is dry, it becomes a little lighter in weight and, more importantly, harder—kind of like bread. There’s no secret recipe to the process either. To fire harden anything of wood, bone, or antler, simply turn the item over the fire, just above the flames, until it starts to get a little color. Here’s how to use what nature provides to build a spear for hunting and personal defense. 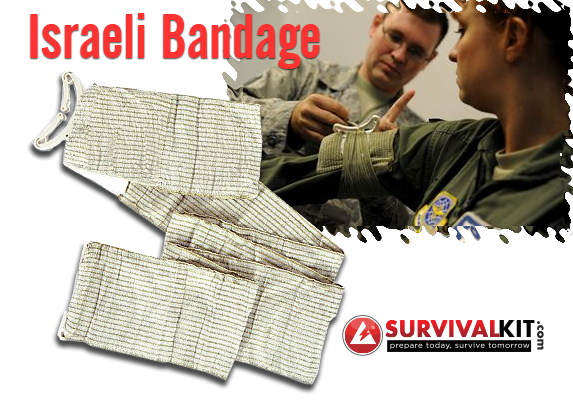 Pick The Right Stick
Wood species selection is a major concern for wood workers, especially if you’re relying on that wooden object as a mode of defense or dinner collection. Select hardwood species for this project, such as oak, hickory, ash, locust, maple, osage, or anything else that’s dense and locally available. Skip the soft woods, like poplar, pine, aspen, and their relatives, which break too easily. One other thing to keep in mind when selecting your materials is its starting dimensions. Since there’s not much sense in whittling down a mighty tree into a skinny rod, start with a sapling that is growing in dense, shady conditions, which will result in a staff of dense wood with tight growth rings. The ready-to-go size will also save you a ton of carving work. Choose live wood or a recently deceased sapling for your spear. 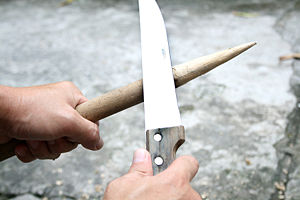 Point And Bake
It’s literally that easy to make a fire-hardened spear. Carve a point on one end (or both ends), making it as sharp as possible. Rotate the carved area just above the flames of a small fire to dry out the wood. Once it starts to get a “toasted” look, you’re done. For a point of reference, pretend that you’re trying to toast the perfect marshmallow over those flames. It should be golden brown, with little to no black char. Once you’re done over the flames, rub plant or animal oil on the spear point, which should be sharpened again after hardening. You could peel the bark from the shaft, or leave it in place for grip. 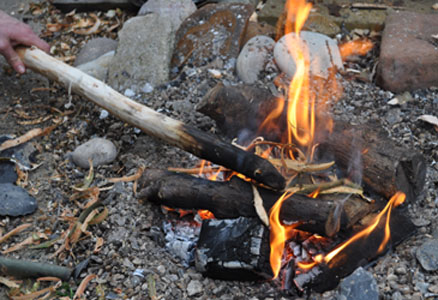 If you’re wondering what you can penetrate with a fire-hardened wood spear, let me tell you about a little experiment I presided over a few years ago. Two hanging whitetails in late November served as our test subjects, and an eager group of guys in my survival class served as the test panel. Someone asked about spears, and I mentioned that our ancestors used fire-hardened wood spears, but I wasn’t sure if they could penetrate deer hides without a stone point. Before I knew what happened, I had inadvertently thrown down the gauntlet of a primitive technology test.

Hastily created spears were cut from maple saplings, pointed up with pocket knives, and fire hardened for toughness. After the first eye opening strike, those poor dead animals didn’t stand a chance. By throwing their spears, the stronger guys were able to penetrate the hide and one side of the ribcage, deep into the vital organs. It didn’t hurt that these young men were college athletes in peak condition, and getting that close to a live deer is a challenge in and of itself, but the test of the spear’s quality was proved. 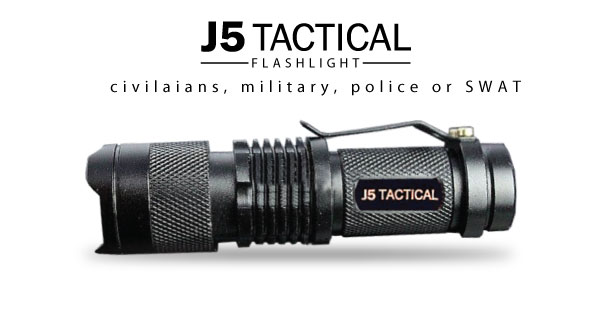