Home
|
Survival News
|
Like Your Toenails? Then Don’t Get a Fish Pedicure 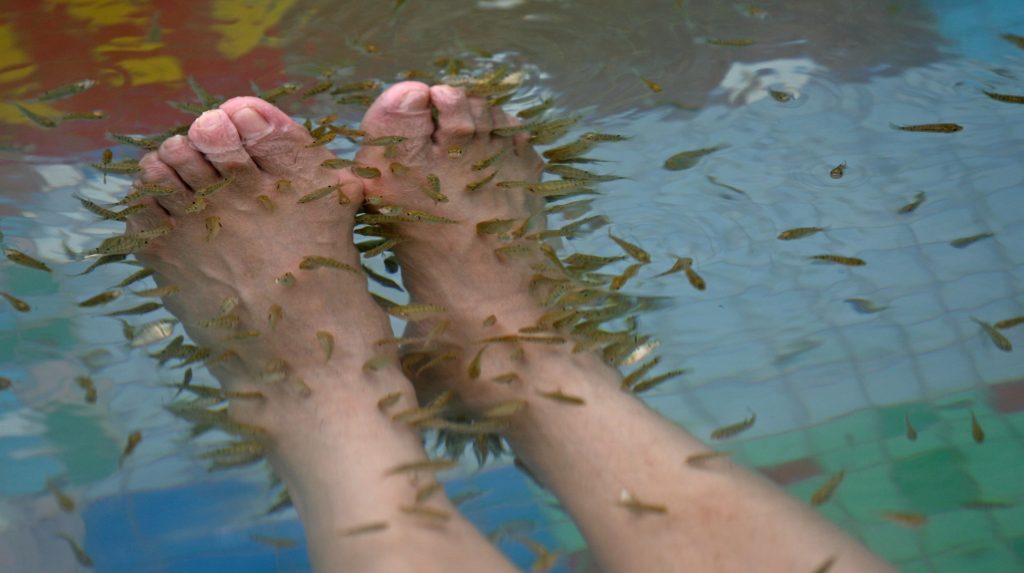 CHONGQING, CHINA – JANUARY 7: (CHINA OUT) A tourist enjoys a therapy spa in a hot spring resort, home to “Doctor Fish” on January 7, 2007 in Chongqing Municipality, China. Doctor fish are freshwater fish traditionally used in areas of Turkey for treatment of skin diseases such as psoriasis; they eat the affected and dead areas of the skin, leaving the healthy skin to grow. (Photo by China Photos/Getty Images)

Fish pedicures have blossomed in popularity over the past decade or so due to the idea that they’re a healthy and fun way to detox the feet.  The assumption is that little fish like to chew on dead skin, fungus and other nasties that develop on our feet while leaving healthy tissue alone, and this leaves us with fresh, baby-soft feet as a result.  This couldn’t be farther from the truth, and as one woman recently found out, a fish pedicure can cause a lot of long-term and serious problems.

A common mis-perception is that the water in fish pedicure tanks is clean and germ-free because the fish eat contaminants.  The reality is that the fish do get nutrients from flakes of dead skin and other microbes, but they don’t vacuum them up from the water and purify it as they go.  Water gets contaminated from particles fish don’t eat, their waste products, as well as impurities that people bring with them when they dunk their feet in tanks.  Considering that more than 30 people a day can be visiting any given tank, that water gets pretty dirty, pretty quick.

In fact, dirty water in tanks, as well as microbes that accumulate in the mouths of fish, can expose people to hundreds of different bacteria and fungi, and many of them can produce serious, long-term effects.  One of the more-extreme examples is from onychomadesis, or when toenails turn yellow and start dying and falling off months, if not years after exposure.

This Isn’t the First Time

Outbreaks linked to fish pedicures are common, yet they don’t happen frequently-enough to cause a panic.  Hard data is also difficult to obtain because many problems develop so long after the fact that it’s hard to pinpoint a contaminated fish tank as a source of exposure.  Consequently, people are unwittingly putting themselves in harm’s way simply because they’re not told the truth about potential risks.

Not only are outbreaks associated with tank water a lot more common than people think, but fish themselves can be carriers of a wide range of pathogens that can lead to infections.  Many of these flesh-eating fish are imported from Asia, and there have been a number of cases of entire shipments being contaminated.  These fish somehow get past checks by customs officials, end up in spas, and ultimately put hundreds, if not thousands of people at risk.

Fish used for pedicures normally feed on algae that sticks to rocks and branches under water.  When those supplies run out, they start foraging and scavenging, often eating organic debris to squeeze as much nutrition from these emergency sources as possible.  However, what they get from these emergency supplies is just enough to keep them alive.  Yet, people somehow believe that these fish were created for this purpose, and that this is a clean, eco-friendly, safe and natural way to care for feet.

We don’t need to into a lot of detail regarding the risks associated with dunking feet to be eaten by fish in a cesspool of putrid water, and you can do some further research if you’re so inclined.  The important lessons to learn from this is that anytime people share something, we expose ourselves to the sum total of what they leave behind.  The other takeaway is that we really need to do our due diligence when it comes to separating fact from fiction when we encounter any remedy or treatment that is labeled as all-natural.

We’ll be the first to admit that we promote a lot of natural things here, but these are established, tried-and-true options that pose minimal risk even if they don’t work as expected.  However, there’s a big difference between choosing options that known to work, and have been tested over the course of time, and following the latest unsupported trends and gimmicks.  The trick is to be able to know the difference so that you can avoid falling victim to the consequences of making poor choices.

Let this serve as a friendly reminder to think things through, weigh pros-and-cons, and use good old-fashioned common sense when it comes to deciding whether or not to take a chance on any given cure, remedy or treatment.  The more proactive and sensible you are now will reduce the chances of experiencing all kinds of unwanted problems later.  This is an important quality to have if you end up having to navigate uncertainties associated with survival situations where the impact of poor choices can have serious consequences.