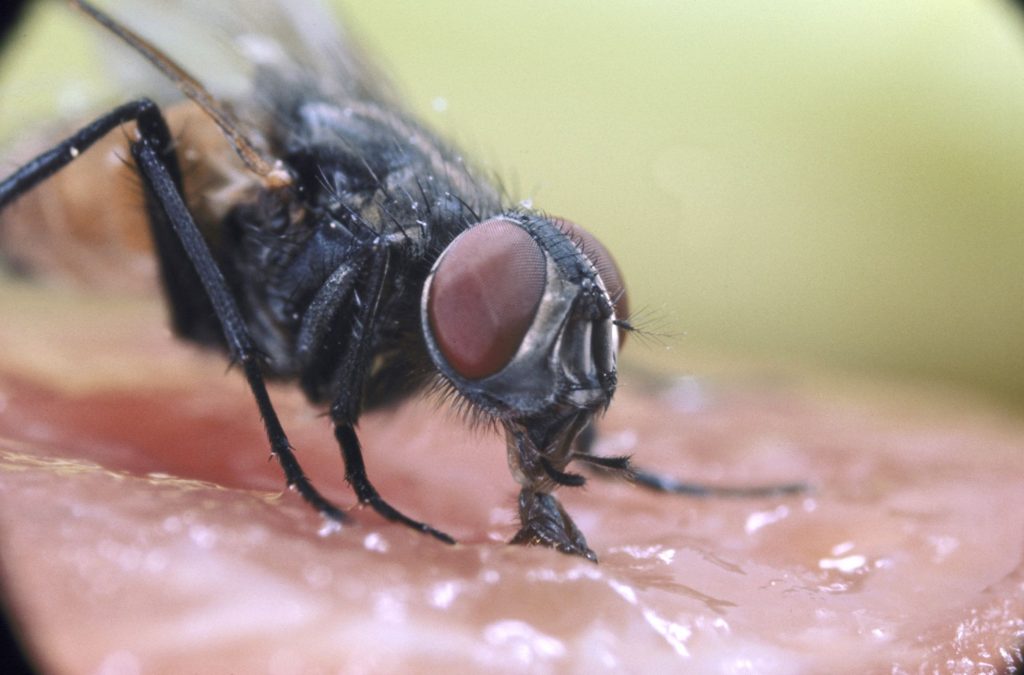 Houseflies are more than an ever-present annoyance, they also represent one of the leading disease-transmitting insects that we have to contend with.  While their origins can be traced back to Asia, the common housefly now populates every continent with the exception of Antarctica, and it’s only a matter of time before they settle there as well.  Let’s take a look at some of the lesser-known characteristics of houseflies in order to reaffirm the importance of keeping them under control as much as possible.

Research suggests that houseflies and humans are inseparable, and without humans, this species probably would not survive to the extent that it has thus far.  We rely on flies to break down human-caused waste while flies rely on our filth in order to do everything from nest to reproduce.  In fact, it’s rare to see the housefly in an environment that is devoid of human activity.  However, they also have a keen sense of our presence, and they can travel great distances once they pick up our scent, or the scent of what we want to leave behind.

Consequently, it’s impossible to eradicate them, which is why we contend with them on a regular basis. The best we can hope for is to create conditions that will keep them at bay.  However, it’s also important that we remain vigilant when it comes to controlling houseflies due to their propensity to cross-contaminate things and transmit disease.

Flies are filthy, we all know that, but they are a lot dirtier than most people think.  Not only do flies regurgitate as they feed whenever the land on our food, dishes or cups, but they also defecate.  Consequently, even if they’re not leaving deposits of their previous meal as they feed on what we’re eating or drinking, but they leave behind whatever they’ve processed as well.  Theoretically, we can be exposing ourselves to all kinds of germs and pathogens every time a fly touches something that we will put to our mouths.

In fact, it’s not beyond the realm of possibility that some cases of salmonella, e. Coli infections and other outbreaks could be spread by flies.  We’ll never know the true extent of the problem, but it’s something that we should think about the next time we brush off flies from our food, especially after they’ve been hanging around for a while.

Most flies will set up housekeeping near food sources, particularly in populated, congested areas.  However, flies have been known to travel up to 20 miles in search of food in rural areas.  On average, the urban fly may have a territory of only a couple of blocks whereas rural ones can easily travel more than five miles on a regular basis before heading home.

They are also prolific breeders that will set up camp in a new location if it’s more desirable than the one they call home now.  Consequently, we can easily become overrun with flies if we’re not careful with how we dispose of trash and secure food.

While flies will feed on a wide-range of organic matter, they can’t eat solids.  Instead, they regurgitate on their food, and the acids from their stomachs causes it to liquefy.  Flies then suck up the juice with a straw-like appendage before it passes through their digestive tract.  Unfortunately, they tend to leave some of this vomit behind as well.  Another interesting factoid is that flies taste with their feet instead of their mouths.  This is one reason why they walk, hop and bounce around food as they scope out the best place to settle in for their next meal.

Contrary to popular belief, the average housefly can live for 28 days, and during that time females can produce up to 500 eggs.  During that time, flies will be on a continual hunt for food to supply them with the enormous amount of energy they need on a daily basis, and much of that energy will be spent on trying to breed.

While we’re not saying that you should discard food and throw away drinks whenever flies land on them, it’s important to keep living areas as fly-proof as possible now as well as during a prolonged survival situation.  It doesn’t take a lot of refuse to attract flies, and it also doesn’t take a lot to become overrun with these disease-carrying opportunists.  While it may take some persistence and effort, you and your family will dramatically decrease the chances of catching a bug, no pun intended.