Home
|
Survival News
|
Dam Failure: The Silent Threat for Most of the Country 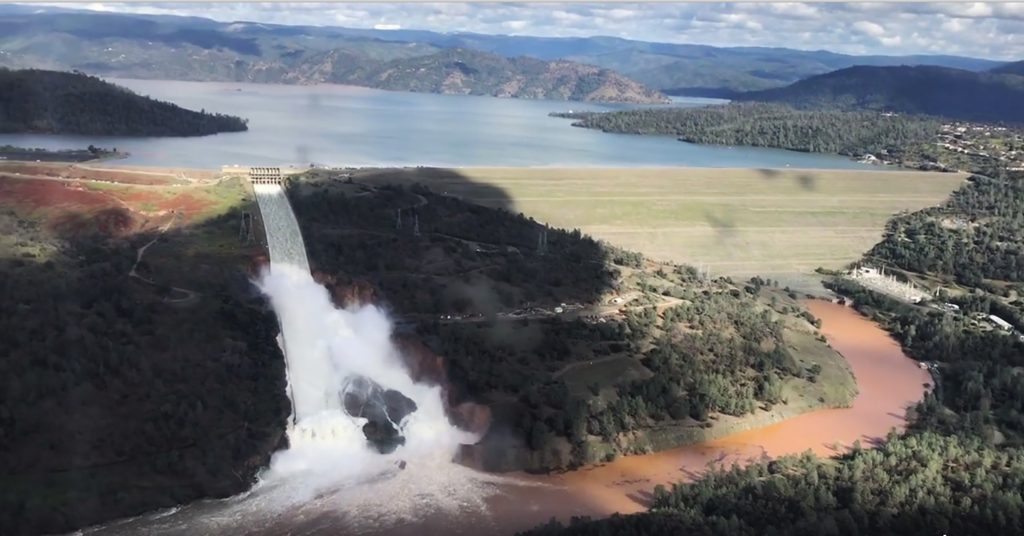 This Friday, Feb. 10, 2017 image from video provided by the office of Assemblyman Brian Dahle shows water flowing over an emergency spillway of the Oroville Dam in Oroville, Calif., during a helicopter tour by the Butte County Sheriff’s office. About 150 miles northeast of San Francisco, Lake Oroville is one of California’s largest man-made lakes, and the 770-foot-tall Oroville Dam is the nation’s tallest. (Josh F.W. Cook/Office of Assemblyman Brian Dahle via AP)

There are more than 80,000 dams in the United States, and some of them are more than a hundred years old.  While most of them are not nearly as large and monumental as Hoover Dam, they still hold back enormous amounts of water that can be unleashed on communities downstream with little or no warning.  In fact, some suggest that the average dam spill would produce a torrent of water that is around 30 feet high for more than 10 miles if it was released during a major dam failure.

Dam failures are rare, and the last one that threatened humans occurred in 2005.  A computer glitch caused a reservoir in Missouri to overflow its banks, and the weight of the water caused part of the wall to collapse.  It released more than a billion gallons of water in about 10 minutes, created a raging torrent over 20 feet high, and it happened in the wee hours of the morning when downstream residents were still asleep.  Fortunately, the water level and force of the flow dissipated before reaching communities.

Dams across the country are showing signs of age, and maintenance is becoming more and more challenging and expensive.  Changing weather patterns are placing strain on dams and equipment, and technology is making dams vulnerable to glitches or hacking.  Consequently, the risk of experiencing more failures, at a greater frequency is increasing with each passing year.

While few of us think about dams, the majority of the population lives near a river with dams that help to control the flow of water.  This is why it’s important to have a dam-break emergency plan in place.

The first, and most important thing that all of us can do is to know where to flee to higher ground at a moment’s notice.  Whether it’s your rooftop, running up a hill or driving out of town, have more than one choice in mind, and make sure that you practice a mock evacuation or two so you’ll know exactly what to do during an emergency.  Remember that floods can occur within minutes of a dam failure, and you may not have time to do anything else other than get out of the way.

Aside from knowing where to escape, prepare a bug out bag that includes basic necessities along with things like phone numbers, maps and some cash.  This will help you to contact and get to your safe house as quickly as possible.

If you can’t evacuate beforehand, and you’re forced to wade through flood waters to get out of the area, remember the following:

Avoid walking through moving water.  All kinds of debris can be lurking beneath and moving at a high rate of speed.  Moving water that’s as little as two feet deep can also have enough force to knock down the average adult, and you will be struggling to keep your balance while navigating uneven terrain that you can’t see below the surface.  If you need to get out into the water, try to find areas that are still or barely moving.

It’s also important to remember that all it takes is a couple of feet of water to lift vehicles from the ground.  Avoid driving in flooded areas unless you’re absolutely sure that it’s only a foot deep or so.

If you end up in the water, avoid drinking it, and try to get out of your clothes and rinse yourself off as quickly as possible.  All of that water will be transporting every contaminant that was on the ground or upstream, and you want to minimize your contact with it.  If you’re stuck at home and forced to upper-levels or your roof, try to secure your survival kit and some basic essentials in a plastic bag to keep them dry.

These are just a few general things to consider as you incorporate a dam failure in your disaster planning.  Become familiar with what dams are in your area, the threat they pose, and what local authorities recommend residents do if a failure were to occur.  This information will help you to develop a plan that is tailored to your needs, and you’ll be in a much-better position to act accordingly if a torrent of water is barreling in your direction without warning.